This is an oldie but a goodie and is reprinted with permission from Plagiarism Today. Thank you, Jonathon Bailey, for letting us share with our readers.

BY JONATHAN BAILEY: For many, the holiday season is the best time of the year. A chance to spend time with the family and celebrate peace, love, and togetherness.

But that doesn’t mean that copyright doesn’t enter into it at least a little bit.

Simply put, the holidays, are also an important time commercially, including for content creators. Every year dozens of films and TV shows seek to become the next Christmas classic. Likewise, many musicians have made their careers on holiday songs.

This means that copyright does play a key role in the holidays and, with that role, comes some inevitable copyright myths. So, this year, we’re taking a look at some of the more common Christmas copyright myths. 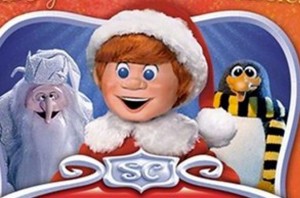 When it comes to Christmas music, most of the songs seem like timeless classics destined for the public domain. However, many of the songs we listen to every year are actually recent creations and are still under copyright.

Songs like “Santa Claus is Coming to Town”, “White Christmas” and “Little Drummer Boy” have been around for decades but are still protected.

While there are other Christmas songs that are public domain, such as “O Little Town of Bethlehem” and “Silent Night”, that lack of copyright only applies to the composition. Recent sound recordings of them are still protected by copyright.

So, even if the song itself is public domain, you can’t hop on your favorite BitTorrent site and begin downloading with immunity. The person who recorded the track likely still holds the right to their specific performance.

For more information on public domain Christmas songs, check out my previous article on the subject.

Once learning that many holiday songs are not public domain, some make the mistake of believing they can’t sing songs at their private party or family gathering.

While it is true that you can not publicly perform in-copyright compositions, your average family gathering doesn’t rise to the level of a public performance. Even BMI, one of the two major providers of public performance licenses, acknowledges this.

If you’re having a larger gathering at a venue, such as at a reception hall, the venue may be required to hold a license if the gathering is open to the public. However, given that even large weddings are considered private events, it’s unlikely the case for your gathering.

Basically, your private get-together is not a public performance and no license is needed. Sing or play away (no matter how badly). 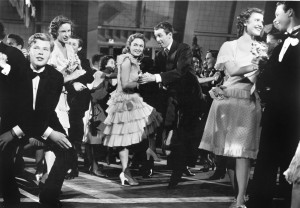 The confusion here is understandable as It’s a Wonderful Life has a very complicated and convoluted copyright history that I’ve covered before.

Basically, due to the lack of copyright renewal, the film fell into the public domain. For about 20 years, it was played widely without license and became a holiday classic. However, in 1990, the Supreme Court ruled that playing a movie based on a copyrighted story without a license to the story was an infringement.

Since the story It’s a Wonderful Life is based upon never went into the public domain, rightsholders used that (along with the copyright to the film’s score) to force networks to stop playing the film. In 1994 the rightsholders signed a “long-term” deal with NBC granting them exclusive rights to air the film.

Today, you can and will see soundless clips from the film used in other movies, but anything involving the plot or the music in the film is copyright protected. 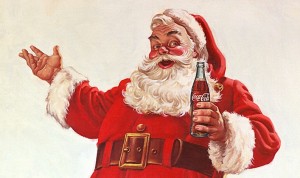 Santa Claus as a character has been a part of western Christian lore since before 1773, when the name “Santa Claus” first appeared in print. However, the portrayals of him have varied wildly over the years.

However, in the 1920s and 1930s, Santa began to appear regularly in ads for Coca-Cola, ads mostly created by artist Haddon Sundblom, who used his neighbor as a model.

Those ads are often credited with solidifying how the United States in particular views Santa, most notably his red outfit but also his beard and rotundness.

However, Sundblom’s vision of Santa was not unique. He drew inspiration from the 1823 poem A Visit from St. Nicholas, which is more commonly known as The Night Before Christmas. That poem is in the public domain (thus spawning my terrible parody of it) and describes a jolly, overweight Santa in a red suit.

In short, while Coca-Cola played a role in making that version of Santa the one everyone recognizes, it did not invent it and holds no rights to it.

Myth 5: The Elf on the Shelf is Public Domain 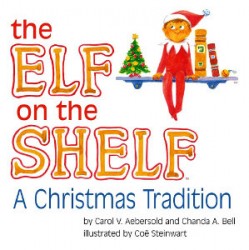 The Elf on the Shelf goes a long way to present itself as an older practice, even subtitling the original book “”A Christmas Tradition”.

However, the original book and toy were first sold in 2005, just 10 years ago. They are still very much in copyright and are very well protected.

This is shown by a lawsuit filed in 2011 that sought to prevent the publication of Elf Off the Shelf, a parody of the original book. An attempt to get an injunction against the parody book failed.

In short, The Elf on the Shelf isn’t an obscure tradition that recently became wildly popular, it’s a completely recent phenomenon completely protected by copyright and, perhaps most importantly, trademark.

All in all, when it comes to copyright and the holidays, it’s just like any other time of the year. Recent creative works are protected and deserve the protection they get.

Just because something becomes a cherished tradition doesn’t mean that it falls out of copyright or becomes free to use. Yes, with enough time all of these works will become public domain, but many are not yet.

So, as you celebrate the holidays, enjoy your time with your family and your friends. Likewise, support the creators that are helping to make your holiday special with content that you enjoy.

It ensures that there will be much more Christmas joy for years to come. 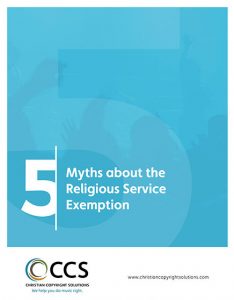 5 Myths about the Religious Service Exemption

Interested in learning more about copyright law and how it affects your church? Enter your information here to download the 5 Myths about the Religious Service Exemption. It adds clarity to some of the top areas of misinformation regarding copyrights.

Jonathan Bailey is a copyright and plagiarism consultant and has been helping small to medium sized creators protect their work for over 10 years. You can find him at his blog, Plagiarism Today, at his consulting firm, CopyByte and on Twitter and Facebook.

About Christian Copyright Solutions: CCS’s quest is to help churches and Christian ministries “do music right.” CCS is an expert on church music copyrights and our primary focus is providing licensing and clear educational resources to churches, as well as representation, administration, and advocacy for copyright owners. Follow us on Twitter, Facebook, and YouTube.  The information contained herein is for informational purposes only and is not legal advice or a substitute for legal counsel.