Trump’s Repeal of FCC Privacy Regulation Could Reshape the Internet

EDITOR’S NOTE: Thanks to our friend, Jonathan Bailey for today’s informative guest article. His website, Plagiarism Today, is a site about content theft, copyright infringement and plagiarism issues on the Web. Though well-versed in copyright, Jonathan Bailey is not a lawyer and can not give out legal advice.

On April 3rd, President Trump signed a resolution that repealed Federal Communications Commission (FCC) regulations that protected the privacy of internet users from their ISPs.

While there’s a lot that’s not known about how the change will impact customers, many are not waiting to see how things shake out. Searches for virtual private network (VPN) providers skyrocketed after the Senate vote and many media outlets have been explaining that a VPN is essential to protecting your privacy.

But this uptick in interest in VPNs may have some unintended consequences. If enough users switch to using VPNs full time (or near-full time) it could bring about major changes to copyright, licensing and, most importantly, to the internet itself.

However, the reason for this isn’t necessarily straightforward. While VPNs certainly have been used for nefarious purposes we aren’t talking about a new wave of BitTorrent users adopting VPNs, we’re talking about fully law-abiding citizens adopting them out of privacy concerns.

That has the potential to change both the way we look at VPNs and how we access content in the near future.

VPNs: What and Why 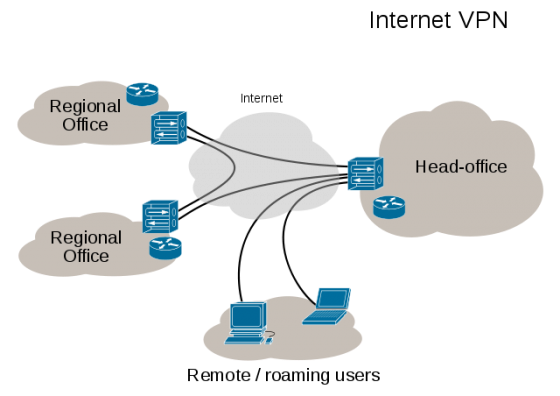 I wrote a much lengthier primer on VPNs in January 2015, however, there are only a few fundamentals that you need to understand for the purpose of this article.

What a VPN does, most simply, is establish a secure connection with another server and pass all of your internet traffic through that connection.

Think of it, as one provider put it, as a post office box for the internet. All of your “mail” arrives there and no one has your home address.

This has many benefits but, for the purpose of privacy, it prevents your local ISP from seeing your internet traffic. To them, it all looks like encrypted traffic to the VPN server. So Comcast, Time Warner, Cox, etc. can’t see what sites or domains you are visiting.

If you’re concerned about your ISP selling or otherwise misusing that information, this is a potential boon. That is, so long as you trust your VPN provider to not do the same. However, VPN providers have long been oriented around privacy and many keep no logs at all.

Many users, historically, have taken advantage of VPNs to engage in unlawful behavior. They have used the privacy of it to pirate copyrighted works or used the fact they can appear to be located anywhere in the world to access geographically-limited content (such as Netflix).

This has given VPNs something of a salacious reputation even though they are widely used by corporations for remote workers, or by travelers protecting their browsing while using public wifi.

Still, the use of VPNs has been fairly limited, generally used in situations where extra security is required (such as when sending DMCA notices). Now though, many people are looking to start using VPNs and they aren’t looking at it to protect them on hotel and coffee shop connections, they’re looking to protect everything they do.

That’s a major shift that, potentially, comes with some big changes for the internet.

When looking at how this might change the internet. There are two questions that we have to answer.

While we can’t answer either of these questions right now, we can look at what might happen if both of the answers are “Yes”.

Though some might expect the big fight to be over copyright or other law enforcement, that’s probably not the case. Those who use BitTorrent have long known their actions are being closely monitored and, if they haven’t gotten a VPN by now, they probably won’t be motivated just because yet one more entity will be watching them.

Instead, the real issue becomes geolocation and geoblocking. Netflix, Hulu and YouTube all use geoblocking to ensure that their content is not being viewed where it isn’t licensed. As part of that, they all block connections from known VPNs.

But, if a significant number of users are using VPNs and refuse to disable them to access Netflix/Hulu/Etc., then a real problem arises. Users who had been happily getting their content from legitimate sources may find themselves shut out from those services.

While there are ways to work around these limitations and allow Netflix/Hulu traffic to pass around the VPN, that is both technically difficult and weakens the privacy of a VPN.

While those customers could (and some certainly will) turn to illegal sources to fill the gap, others may just abandon Netflix altogether. This leaves streaming services with just two options.

The first isn’t likely because of the nature of the battle. This isn’t a war over technology, it’s a war over privacy. Confirming what country someone is from is gaining a piece of information about them, meaning, they are giving up a (small) piece of their privacy.

In short, there’s no way to enforce geoblocking without learning and verifying something about the viewer and that knowledge, in this climate, is a breach of privacy.

The second is also going to be difficult. Windowing has long been a powerful tool for content creators to maximize profit in their work. Switching to purely global licenses not only likely means creators making less money, but it also means an entire licensing and distribution industry will go out of business.

While this might, in many ways, be a good thing for the web, it does create some serious concerns. Creators will be more reluctant to work with streaming services if the license is “all or nothing” and services, such as Netflix, will likely have to pay more for content and will carry a more limited library (at least compared to what they have in the U.S. currently).

What this means down the road becomes less clear but it’s obvious that business models would have to change.

On the modern web, online availability is not an option if you wish to combat piracy. So it would become important to quickly find a way to get content online legally and globally to avoid a potential collapse of creative industries.

When the law stops protecting privacy, technology will often step in.

However, if VPN usage does increase by a significant amount, it’s going to represent a fundamental change in how people use the internet and, with it, a change to the internet itself.

To be clear, we’re not talking a rush of criminals and/or pirates to VPN sites. They have long had and used the technology. What’s new is the rush of law-abiding citizens concerned about their privacy.

But it’s this newfound legitimacy that VPNs are receiving that may push them to the point where they have a significant impact on the web. While they have always been situationally useful (and even necessary), now they could just become another part of how many people surf the web.

That change will involve rethinking much of the internet and how creators do business on it.

The post How the Privacy Debate Could Reshape the Internet appeared first on Plagiarism Today.
Read in browser »

About Christian Copyright Solutions: CCS’s quest is to help churches and Christian ministries “do music right.” CCS is an expert on church music copyrights and our primary focus is providing licensing and clear educational resources to churches, as well as representation, administration, and advocacy for copyright owners. Follow us on Twitter, Facebook, and YouTube. The information contained herein is for informational purposes only and is not legal advice or a substitute for legal counsel.